Tyrosine (from the Greek tyros, meaning cheese, as it was first discovered in 1846 by German chemist Justus von Liebig in cheese[1][2]), 4-hydroxyphenylalanine, or 2-amino-3(4-hydroxyphenyl)-propanoic acid, is one of the 20 amino acids that are used by cells to synthesize proteins. It has a phenol side chain with a hydroxyl group. Upon the location of the hydroxyl group, there are three structural isomers of Tyr, namely para-Tyr (p-Tyr), meta-Tyr (m-Tyr) and ortho-Tyr (o-Tyr). Enzymatically, only the first isomer (p-Tyr) is produced from L-Phe by the Phe-hydroxylase enzyme. The other two isoforms, m-Tyr and o-Tyr can be produced as a consequence of free radical attack on Phe in states with increased oxidative stress.

Tyrosine is abundant in insulin as well as the enzyme papain

Meat, dairy, eggs as well as almonds, avocados and bananas are good sources of this nutrient. 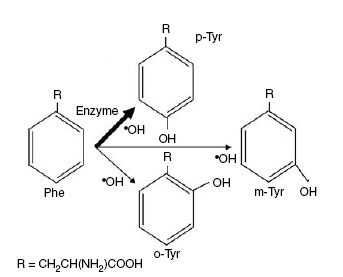 Tyrosine cannot be completely synthesized by animals but it may be regarded as a nonessential amino acid in humans as it can be synthesised by hydroxylation of phenylalanine if the latter is in abundant supply.

It is produced by plants and most microorganisms from prephenate, an intermediate on the shikimate pathway.

Prephenate is oxidatively decarboxylated with retention of the hydroxyl group to give p-hydroxyphenylpyruvate. This is transaminated using glutamate as the nitrogen source to give tyrosine and α-ketoglutarate.

Tyrosine hydroxylase (TH) is the rate-limiting enzyme involved in the synthesis of the catecholamines such as dopamine, norepinephrine and epinephrine.

Some of the tyrosine residues can be tagged with a phosphate group (phosphorylated) by protein kinases. (In its phosphorylated state, it is referred to as phosphotyrosine.). Tyrosine phosphorylation is considered as one of the key steps in signal transduction and regulation of enzymatic activity. Phosphotyrosine can be detected through specific antibodies.

Tyrosine is also precursor to the thyroid hormones thyroxine and triiodothyronine, the pigment melanin, and the biologically-active catecholamines dopamine, norepinephrine and epinephrine.

In addition to its role in proteins, tyrosine is the precursor for the synthesis of melanin (the black and brown pigment of skin and hair),

In Papaver somniferum, the opium poppy, it is used to produce morphine.

One study found that it had no impact on endurance exercise performance.[3]