The sciatic nerve is a large nerve that runs down the lower limb. It is the longest single nerve in the body.

The Sciatic supplies nearly the whole of the skin of the leg, the muscles of the back of the thigh, and those of the leg and foot.

The nerve enters the lower limb by exiting the pelvis through the greater sciatic foramen, below the Piriformis muscle.

It descends between the greater trochanter of the femur and the tuberosity of the ischium, and along the back of the thigh to about its lower third, where it divides into two large branches, the tibial and common peroneal nerves. This division may take place at any point between the sacral plexus and the lower third of the thigh. When it occurs at the plexus, the common peroneal nerve usually pierces the Piriformis muscles.

In the upper part of its course, the nerve rests upon the posterior surface of the ischium, the nerve to the Quadratus femoris, the Obturator internus and Gemelli; it is accompanied by the posterior femoral cutaneous nerve and the inferior gluteal artery, and is covered by the Gluteus maximus.

Lower down, it lies upon the Adductor magnus, and is crossed obliquely by the long head of the Biceps femoris.

The nerve gives off articular and muscular branches.

Pain caused by a compressed or damaged sciatic nerve is called sciatica. 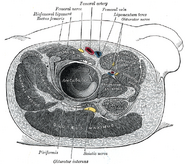 Plan of sacral and pudendal plexuses.

Nerves of the right lower extremity Posterior view.
Add a photo to this gallery

Retrieved from "https://psychology.wikia.org/wiki/Sciatic_nerve?oldid=44654"
Community content is available under CC-BY-SA unless otherwise noted.