In genetics, the term "recessive gene" refers to an allele that causes a phenotype (visible or detectable characteristic) that is only seen in a homozygous genotype (an organism that has two copies of the same allele). Every person has two copies of every gene, one from mother and one from father. If a genetic trait is recessive, a person needs to inherit two copies of the gene for the trait to be expressed. Thus, both parents have to be carriers of a recessive trait in order for a child to express that trait. If both parents are carriers, there is a 25% chance with each child to show the recessive trait.

The term "recessive gene" is part of the laws of Mendelian inheritance created by Gregor Mendel. Examples of recessive genes in Mendel's famous pea plant experiments include those that determine the color and shape of seed pods, and plant height.

Autosomal recessive is a mode of inheritance of genetic traits located on the autosomes (the 22 non-sex determining chromosomes).

In opposition to autosomal dominant trait, a recessive trait only becomes phenotypically apparent when two copies of a gene (two alleles) are present. In other words, the subject is homozygous for the trait. 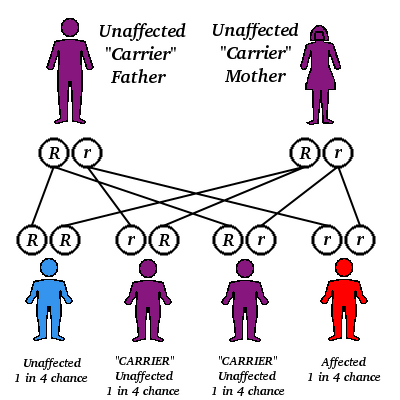 Recessive genetic disorders occur when both parents are carriers and each contributes an allele to the embryo. As both parents are heterozygous for the disorder, the chance of two disease alleles landing in one of their offspring is 25% (in autosomal dominant traits this is higher). 50% of the children (or 2/3 of the remaining ones) are carriers. When one of the parents is homozygous, the trait will only show in his/her offspring if the other parent is also a carrier. In that case, the chance of disease in the offspring is 50%.

Technically, the term "recessive gene" is imprecise because it is not the gene that is recessive but the phenotype (or trait). It should also be noted that the concepts of recessiveness and dominance were developed before a molecular understanding of DNA and before molecular biology, thus mapping many newer concepts to "dominant" or "recessive" phenotypes is problematic. Many traits previously thought to be recessive have mild forms or biochemical abnormalities that arise from the presence of the one copy of the allele. This suggests that the dominant phenotype is dependent upon having two dominant genes and the presence of one dominant and one recessive gene creates some blending of both dominant and recessive traits.

Recessive genes are usually represented by a lowercase letter in a Punnett square, as opposed to the uppercase letters of dominant genes (see example at right). Using the letter "T" as an example, only in "tt" (the homozygous recessive genotype, indicated by blue) would the recessive physical trait appear. The form "Tt" is called heterozygous (indicated by magenta with a red border), and, even though a recessive allele is present, the dominant gene is the one that appears (becomes the phenotype). The homozygous dominant genotype is "TT" (indicated by red).

Gregor Mendel performed many experiments on pea plants (Pisum sativum) while researching traits, chosen because of the simple and low variety of characteristics, as well as the short period of germination. He experimented with color (green vs. yellow), size (short vs. tall), pea texture (smooth vs. wrinkled), and many others. By good fortune, the characteristics displayed by these plants clearly exhibited a dominant and recessive form. This is not true for many organisms.

For example, when testing the color of the pea plants, he chose two green plants, since green was more common than yellow. He mated them, and examined the offspring. He continued to mate only those that appeared green, and eventually, the yellow ones would stop being produced. He also mated the yellow ones together and determined that only yellow ones were produced.

Dominance/recessiveness refers to phenotype, not genotype. An example to prove the point is sickle cell anemia. The sickle cell genotype is caused by a single base pair change in the beta-globin gene: normal=GAG (glu), sickle=GTG (val). There are several phenotypes associated with the sickle genotype: -

This example demonstrates that one can only refer to dominance/recessiveness with respect to individual phenotypes.