The Psoas major is a long fusiform muscle placed on the side of the lumbar region of the vertebral column and brim of the lesser pelvis.

The muscle proceeds downward across the brim of the lesser pelvis, and diminishing gradually in size, passes beneath the inguinal ligament and in front of the capsule of the hip-joint and ends in a tendon; the tendon receives nearly the whole of the fibers of the Iliacus and is inserted into the lesser trochanter of the femur.

A large bursa which may communicate with the cavity of the hip-joint, separates the tendon from the pubis and the capsule of the joint.

It forms part of a group of muscles called the hip flexors, whose action is primarily to lift the upper leg towards the body when the body is fixed or to pull the body towards the leg when the leg is fixed.

For example, when doing a sit up that brings the torso (including the lower back) away from the ground and towards the front of the leg, the hip flexors (including the iliopsoas) will flex the spine upon the pelvis.

Crepitus, or “popping” in the lower back can indicate unequal lateral forces on the lumbar spine owing to a strength and/or laxity discrepancy between the right and left psoas major muscles.[1] Tight hip flexors (psoas, illiacus, tensor fascia latae), either unilaterally or bilaterally (one side or both sides), are a common though unsung cause of lower back pain, and can be accompanied by Iliopsoas tendinitis, or “snapping hip syndrome.” Physical therapists may recommend stretching and/or strengthening of one of both psoas muscles if lower back pain is indicated.

Stretching the psoas can be difficult because it is impossible to isolate the muscle, and thus any stretch thereof must necessarily stretch all hip flexor muscles and typically the quadriceps as well. Strengthening the psoas is also tricky, but typically involves some variation of supine leg raises, or, in a gym setting, knee raises on a levered machine. A common evaluation of psoas strength is to ask the patient to stand straight up with back against a wall, feet 2-3 inches from the wall. The patient is then instructed to raise the knee as high (close to the chest as possible) for 30 seconds. If the patient’s knee falls below horizontal (femur below 90 degrees) before 30 seconds has elapsed, weakness of the iliopsoas on the side of the knee being raised is indicated.

The Psoas is the major leg mover of gait (walking). Stretching and Chiropractic adjustments to the femur, pelvus and lumbars is often indicated in correcting the psoas imbalance and resolving low back pain.

Gray244.png
Right femur. Anterior surface.
Gray388.png
Diagram of a transverse section of the posterior abdominal wall, to show the disposition of the lumbodorsal fascia. 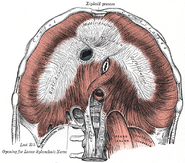 The diaphragm. Under surface.
Gray430.png
Muscles of the iliac and anterior femoral regions. 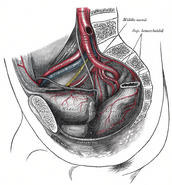 The arteries of the pelvis. 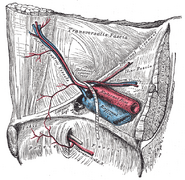 The relations of the femoral and abdominal inguinal rings, seen from within the abdomen. Right side.
Gray599.png
The thoracic and right lymphatic ducts. 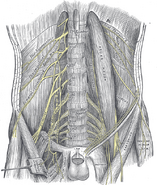 The lumbar plexus and its branches. 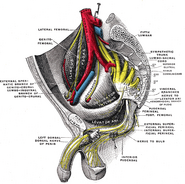 Sacral plexus of the right side.
Gray1126.png
Transverse section, showing the relations of the capsule of the kidney.
Add a photo to this gallery

Retrieved from "https://psychology.wikia.org/wiki/Psoas_major_muscle?oldid=99271"
Community content is available under CC-BY-SA unless otherwise noted.