Presbyopia (Greek word "presbyteros" (πρεσβύτερος), meaning "elder") is the eye's diminished ability to focus that occurs with aging. The most widely held theory is that it arises from the loss of elasticity of the crystalline lens, although changes in the lens's curvature from continual growth and loss of power of the ciliary muscles (the muscles that bend and straighten the lens) have also been postulated as its cause. 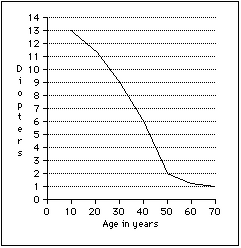 Presbyopia is not a disease as such, but a condition that affects everyone at a certain age. The first symptoms are usually noticed between the ages of 40-50, though in fact the ability to focus declines throughout life, from an accommodation of about 20 dioptres (ability to focus at 50 mm away) in a young person to 10 dioptres at 25 and levelling off at 0.5 to 1 dioptre at age 60 (ability to focus down to 1 -2 metres only). For those with good distance vision, it may start with difficulty reading fine print, particularly if the lighting is poor, or with eyestrain when reading for long periods. Many advanced presbyopes complain that their arms have become "too short" to hold reading material at a comfortable distance.[1]

In optics, the closest point at which an object can be brought into focus by the eye is called the eye's near point. A standard near point distance of 25 cm is typically assumed in the design of optical instruments, and in characterizing optical devices such as magnifying glasses.

Presbyopia, like other focus defects, becomes much less noticeable in bright sunlight. This is not the result of any mysterious 'healing effect' but just the consequence of the iris closing to a pinhole, so that depth of focus, regardless of actual ability to focus, is greatly enhanced, as in a pinhole camera which produces images without any lens at all. Another way of putting this is to say that the circle of confusion, or blurredness of image, is reduced, without improving focusing.

A delayed onset of seeking correction for presbyopia has been found among those with certain professions and those with miotic pupils.[2] In particular, farmers and housewives seek correction later, whereas service workers and construction workers seek eyesight correction earlier.

There is some confusion in articles and even textbooks over how the focusing mechanism of the eye actually works. In the classic book, 'Eye and Brain' by Gregory, for example, the lens is said to be suspended by a membrane, the 'zonula', which holds it under tension. The tension is released, by contraction of the cilliary muscle, to allow the lens to fatten, for close vision. This would seem to imply that the cilliary muscle, which is outside the zonula must be circumferential, contracting like a sphincter, to slacken the tension of the zonula pulling outwards on the lens. This is consistent with the fact that our eyes seem to be in the 'relaxed' state when focusing at infinity, and also explains why no amount of effort seems to enable a myopic person to see further away. Many texts, though, describe the 'ciliary muscles' (which seem more likely to be just elastic ligaments and not under any form of nervous control) as pulling the lens taut in order to focus at close range.[How to reference and link to summary or text] This has the counterintuitive effect of steepening the lens centrally (increasing its power) and flattening peripherally.

Presbyopia and the 'payoff' for the nearsighted[edit | edit source]

Many people with myopia are able to read comfortably without eyeglasses or contact lenses even after age 40. Myopes considering refractive surgery are advised that surgically correcting their nearsightedness may actually be a disadvantage after the age of 40 when the eyes become presbyopic and lose their ability to accommodate or change focus because they will then need to use glasses for reading.

Presbyopia is not routinely curable - though tentative steps toward a possible cure suggest that this may not be impossible - but the loss of focusing ability can be compensated for by corrective lenses including eyeglasses or contact lenses. In subjects with other refractory problems, multifocal lenses (such as bifocal or trifocal lenses) or progressive lenses are used. In some cases, the addition of bifocals to an existing lens prescription is sufficient. As the ability to change focus worsens, the prescription needs to be changed accordingly.

Around the age of 65, the eyes have usually lost most of the elasticity. However, it will still be possible to read with the help of the appropriate prescription. Some may find it necessary to hold reading materials farther away, or require larger print and more light to read by. People who do not need glasses for distance vision may only need half glasses or reading glasses.

While bifocals and multifocals offer a working solution to everyday problems, they are hated by many, especially engineers, camera operators, and those used to having a good sharp distortion-free image in their work. Varifocals cause straight lines to look bent, and can leave some feeling dizzy after extended use. The power of simple, multiple prescriptions should not be underestimated. Reading glasses hastily prescribed may be fine for reading, but not good for shopping and generally walking around in. A slightly weaker prescription however, just powerful enough for reading using the full remaining accommodation of the eye, may feel much more comfortable for more general use too. Careful calculation of working ranges, together with a certain amount of trial and error, can restore undistorted vision for critical tasks for many people who do not find multifocals to their liking.

In order to reduce the need for bifocals or reading glasses, some people choose contact lenses to correct one eye for near and one eye for far with a method called "monovision". Monovision sometimes interferes with depth perception. There are also newer bifocal or multifocal contact lenses that attempt to correct both near and far vision with the same lens. [3]

New surgical procedures may also provide solutions for those who do not want to wear glasses or contacts, including the implantation of accommodative intraocular lenses (IOLs). Scleral expansion bands, which increase the space between the ciliary body and lens, have not been found to provide predictable or consistent results in the treatment of presbyopia.[4] To read more about surgical proceedures go to: http://www.allaboutvision.com/visionsurgery/presbyopia_surgery.htm

Look up presbyopia in Wiktionary, the free dictionary.

Retrieved from "https://psychology.wikia.org/wiki/Presbyopia?oldid=59442"
Community content is available under CC-BY-SA unless otherwise noted.