Physical intimacy is informal proximity and/or touching, usually between two persons, where their positioning and/or touching is an expression or result of intimate feelings (such as close friendship, love, and/or sexual attraction) which they have for each other. Examples of physical intimacy include being inside someone's personal space, holding hands, hugging, kissing, caressing, and sexual activity. 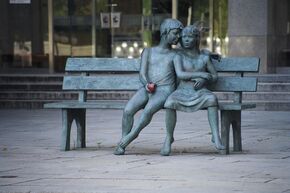 It is possible to be physically intimate with someone without actually touching him or her; however, a certain proximity is necessary. For instance, close proximity and sustained eye contact is a form of physical intimacy. When there is nudity, but still no contact, the degree of physical intimacy is heightened. For instance, there is a game in which a couple may try to see how close they can get to each other without actually touching. Another game involves running hands along the countours of a person's body without touching him or her. These techniques often heighten sexual arousal. When a person enters someone else's personal space for the purpose of being intimate, it is physical intimacy, regardless of the lack of actual physical contact.

Whether a person is wearing clothing or is nude also plays a role. In particular, touching with clothing tends to be more intimate if the layer of clothing at the area of contact is thin and flexible. The layers may be reduced or eliminated even without undressing by touching under someone's clothes. Objects, especially hard or large ones, such as big buttons, zippers, piercings, jewellery, and objects in pockets, may somewhat obstruct intimate touching.

The objective of physical closeness can be a mix in various proportions of desired intimacy and practical aspects, such as lack of space, softness, stability (e.g. in a moving vehicle), and keeping warm; e.g. somebody sits on somebody else's lap, or sleeps leaning on somebody else. Physical closeness may also be involuntary, as in a crowded train or elevator. See also frotteurism, groping. Another form of this kind of closeness is when one goes to a crowded place for entertainment: a bar, disco, pop concert, street festival, etc.

A cuddle party is a party where strangers cuddle, touch, caress, and massage, subject to rules such as no nudity, no hands under clothes, no French kisses and no dry humping or other sex.

Physical intimacy between a human and an animal may involve petting (caressing), hugging and playing.

Also a person, especially a child, may caress and hug a teddy bear or doll. There are also sex dolls, as a surrogate for a person.

A personal relationship that does not involve sexual behavior, e.g. friendship, may involve physical intimacy. This varies greatly. In western culture it is more common among female than among male friends; the latter may want to avoid associations with homosexuality. In other cultures, such as Arab culture, men may hold hands with no implication of homosexuality. Many East Asian cultures typically encourage relatively little body contact between friends, acquaintances, and members of the same sex. Even among family members and spouses, traditionally, there are fewer public displays of affection.

A man and a woman who are friends may avoid physical intimacy to avoid associations with sexuality or emotional intimacy, in order not to appear to be in a sexual relationship. This is especially true if one or both of them is already in such a relationship with another person.

For a comprehensive overview of sex acts and practices, see the article human sexual behavior.

One subject often used as a metaphor for physical intimacy in American English (especially to describe the level of intimacy achieved in intimate encounters) is the game of baseball. In the baseball metaphor, the intimate encounter itself is compared to the act of running the bases:

This metaphor is not commonly known to be used outside of North America, even though baseball is widely played in nations like Cuba and Venezuela.

Other kinds of intimacy include:

Retrieved from "https://psychology.wikia.org/wiki/Physical_intimacy?oldid=27963"
Community content is available under CC-BY-SA unless otherwise noted.