The missing square puzzle is an optical illusion used in mathematics classes, to help students reason about geometrical figures. It depicts two arrangements of shapes, each of which apparently forms a 13x5 right-angled triangle, but one of which has a 1x1 "hole" in it. 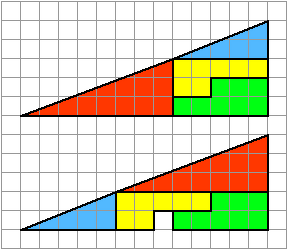 The key to the puzzle is the fact that neither of the 13x5 "triangles" has the same area as its component parts.

The four figures (the yellow, red, blue and green shapes) total 32 units of area, but the triangles are 13 wide and 5 tall, which equals 32.5 units. The blue triangle has a ratio of 5:2, while the red triangle has the ratio 8:3, and these are not the same ratio. So the apparent combined hypotenuse in each figure is actually bent.

The amount of bending is around 1/28th of a unit, which is very difficult to see on the diagram of this puzzle, though just about possible.

According to Martin Gardner, the puzzle has been invented by a New York city amateur magician Paul Curry in 1953. Ever since it has been known as Curry's paradox. The principle of a dissection paradox has however been known since the 1860s.

The integer dimensions of the parts of the puzzle (2, 3, 5, 8, 13) are successive Fibonacci numbers. Many other geometric dissection puzzles are based on a few simple properties of the famous Fibonacci sequence.

Retrieved from "https://psychology.wikia.org/wiki/Missing_square_puzzle?oldid=11770"
Community content is available under CC-BY-SA unless otherwise noted.