The labia majora are two prominent longitudinal cutaneous folds which extend downward and backward from the mons pubis to the perineum and form the lateral boundaries of the cleft of venus, which contains the labia minora, interlabial sulci, clitoral hood, clitoral glans, frenulum clitoridis, the Hart's Line, and the vulval vestibule, which contains the external openings of the urethra and the vagina.

Each labium majus has two surfaces, an outer, pigmented and covered with strong, crisp hairs; and an inner, smooth and beset with large sebaceous follicles.

Between the two there is a considerable quantity of areolar tissue, fat, and a tissue resembling the dartos tunic of the scrotum, besides vessels, nerves, and glands.

The Labia Majora are thicker in front, where they form by their meeting the anterior commisure of the labia majora.

Posteriorly they are not really joined, but appear to become lost in the neighboring integument, ending close to, and nearly parallel with, each other.

Together with the connecting skin between them, they form the posterior commisure of the labia majora or posterior boundary of the pudendum.

The interval between the posterior commissure of the labia majora and the anus, from 2.5 to 3 cm. in length, constitutes the perineum.

The labia majora correspond to the scrotum in the male.

Between the labia majora and the inner thighs are the Labiocrural Folds.

Between the labia majora and labia minora are the interlabial sulci. 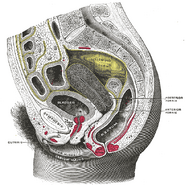 Sagittal section of the lower part of a female trunk, right segment. 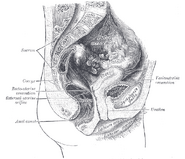 Organs of the female reproductive system.

Female external genitalia.
Add a photo to this gallery

Retrieved from "https://psychology.wikia.org/wiki/Labia_majora?oldid=55739"
Community content is available under CC-BY-SA unless otherwise noted.