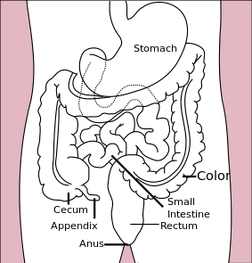 The structure and function can be described both as gross anatomy and at a microscopic level.

The intestinal tract can be broadly divided into two different parts, the small and large intestine. Grayish-purple in color and about 35 mm (1.5 inches) in diameter, the small intestine is the first and longer, measuring 6 to 7 meters (20-23 ft) long average in an adult man. Shorter and relatively stockier, the large intestine is a dark reddish color, measuring roughly 1.5 meters (5 ft) long on average. People will have different sized intestines according to their size and age.

The lumen is the cavity where digested food passes through and from where nutrients are absorbed. Both intestines share a general structure with the whole gut, and are composed of several layers. Going from inside the lumen radially outwards, one passes the mucosa (glandular epithelium and muscularis mucosa), submucosa, muscularis externa (made up of inner circular and outer longitudinal), and lastly serosa.

The large intestine hosts several kinds of bacteria that deal with molecules the human body is not able to break down itself. This is an example of symbiosis. These bacteria also account for the production of gases inside our intestine (this gas is released as flatulence when eliminated through the anus). However the large intestine is mainly concerned with the absorption of water from digested material (which is regulated by the hypothalamus) and the reabsorption of sodium, as well as any nutrients that may have escaped primary digestion in the ileum.

Retrieved from "https://psychology.wikia.org/wiki/Intestines?oldid=94940"
Community content is available under CC-BY-SA unless otherwise noted.