It supplies motor fibres to all of the muscles of the tongue, except the palatoglossus muscle which is innervated by the vagus nerve (X) and the accessory nerve (XI).

Aside from the tongue, the hypoglossal nerve also controls, via the ansa cervicalis, thyrohyoid muscle, omohyoid muscle, sternothyroid muscle and sternohyoid muscle. The nerve fibres supplying these muscles all come from the C1 contribution.

To test the function of the nerve, a person is asked to poke out their tongue. If there is a loss of function on one side (unilateral paralysis,) the tongue will point towards the affected side.

The strength of the tongue can be tested by getting the person to poke at the inside of their cheek, and feeling how strongly they can push a finger pushed against their cheek - a more elegant way of testing than directly touching the tongue.

The tongue can also be looked at for signs of lower motorneuron disease, such as fasciculation and atrophy.

Ipsilateral paralysis/pareisis of the tongue, results in contralateral curvature of the tongue (toward the unimpaired side of the mouth).

Gray559.png
Veins of the tongue. The hypoglossal nerve has been displaced downward in this preparation. 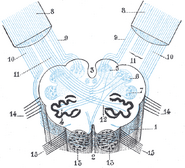 Diagram showing the course of the arcuate fibers.
Gray714.png
Transverse section passing through the sensory decussation.