Static allele frequencies in a population across generations assume: no mutation (the alleles don't change), no migration or emigration (no exchange of alleles between populations), infinite population size, and no selective pressure for or against any genotypes. Genotype frequencies will also be static when mating is random.

In the simplest case of a single locus with two alleles: the dominant allele is denoted A and the recessive a and their frequencies are denoted by p and q; freq(A) = p; freq(a) = q; p + q = 1. If the population is in equilibrium, then we will have freq(AA) = p2 for the AA homozygotes in the population, freq(aa) = q2 for the aa homozygotes, and freq(Aa) = 2pq for the heterozygotes.

This concept was named after G. H. Hardy and Wilhelm Weinberg.

A better, but equivalent, probabilistic description for the HWP is that the alleles for the next generation for any given individual are chosen randomly and independent of each other. Consider two alleles, A and a, with frequencies p and q, respectively, in the population. The different ways to form new genotypes can be derived using a Punnett square, where the fraction in each is equal to the product of the row and column probabilities.

The formula is sometimes written as (p2) + (2pq) + (q2) = 1, representing the fact that probabilities (normalised frequencies for a theoretically infinite population size) must add up to one.

The final three possible genotypic frequencies in the offspring become:

Violations of the Hardy–Weinberg assumptions can cause deviations from expectation. How this affects the population depends on the assumptions that are violated.

If a population violates one of the following four assumptions, the population may continue to have Hardy–Weinberg proportions each generation, but the allele frequencies will change with that force.

How these violations affect formal statistical tests for HWE is discussed later.

The simple derivation above can be generalized for more than two alleles and polyploidy.

Generalization for more than two alleles[]

More generally, consider the alleles A1, ..., Ai given by the allele frequencies p1 to pi;

giving for all homozygotes:

and for all heterozygotes:

The Hardy–Weinberg principle may also be generalized to polyploid systems, that is, for organisms that have more than two copies of each chromosome. Consider again only two alleles. The diploid case is the binomial expansion of:

and therefore the polyploid case is the polynomial expansion of:

where c is the ploidy, for example with tetraploid (c = 4):

Depending on whether the organism is a 'true' tetraploid or an amphidiploid will determine how long it will take for the population to reach Hardy–Weinberg equilibrium.

-ploids, the genotype frequencies in the Hardy–Weinberg equilibrium are given by individual terms in the multinomial expansion of

Application to cases of complete dominance[]

Suppose that the phenotypes of AA and Aa are indistinguishable, i.e., there is complete dominance. Assuming that the Hardy–Weinberg principle applies to the population, then

can still be calculated from f(aa):

can be calculated from

. And thus an estimate of f(AA) and f(Aa) derived from

respectively. Note however, such a population cannot be tested for equilibrium using the significance tests below because it is assumed a priori.

Testing deviation from the HWP is generally performed using Pearson's chi-squared test, using the observed genotype frequencies obtained from the data and the expected genotype frequencies obtained using the HWP. For systems where there are large numbers of alleles, this may result in data with many empty possible genotypes and low genotype counts, because there are often not enough individuals present in the sample to adequately represent all genotype classes. If this is the case, then the asymptotic assumption of the chi-squared distribution, will no longer hold, and it may be necessary to use a form of Fisher's exact test, which requires a computer to solve. More recently a number of MCMC methods of testing for deviations from HWP have been proposed (Guo & Thompson, 1992; Wigginton et al. 2005)

From which allele frequencies can be calculated: 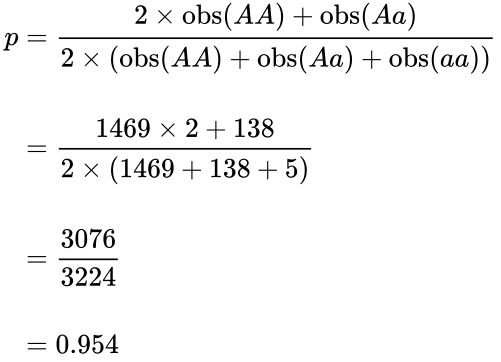 So the Hardy–Weinberg expectation is:

Fisher's exact test can be applied to testing for Hardy–Weinberg proportions. Because the test is conditional on the allele frequencies, p and q, the problem can be viewed as testing for the proper number of heterozygotes. In this way, the hypothesis of Hardy–Weinberg proportions is rejected if the number of heterozygotes are too large or too small. The conditional probabilities for the heterozygote, given the allele frequencies are given in Emigh (1980) as

where n11, n12, n22 are the observed numbers of the three genotypes, AA, Aa, and aa, respectively, and n1 is the number of A alleles, where

An example Using one of the examples from Emigh (1980),[1] we can consider the case where n = 100, and p = 0.34. The possible observed heterozygotes and their exact significance level is given in Table 4.

Unfortunately, you have to create a table like this for every experiment, since the tables are dependent on both n and p.

The inbreeding coefficient, F (see also F-statistics), is one minus the observed frequency of heterozygotes over that expected from Hardy–Weinberg equilibrium.

where the expected value from Hardy–Weinberg equilibrium is given by

For example, for Ford's data above;

For two alleles, the chi-squared goodness of fit test for Hardy–Weinberg proportions is equivalent to the test for inbreeding, F = 0.

Mendelian genetics were rediscovered in 1900. However, it remained somewhat controversial for several years as it was not then known how it could cause continuous characteristics. Udny Yule (1902) argued against Mendelism because he thought that dominant alleles would increase in the population. The American William E. Castle (1903) showed that without selection, the genotype frequencies would remain stable. Karl Pearson (1903) found one equilibrium position with values of p = q = 0.5. Reginald Punnett, unable to counter Yule's point, introduced the problem to G. H. Hardy, a British mathematician, with whom he played cricket. Hardy was a pure mathematician and held applied mathematics in some contempt; his view of biologists' use of mathematics comes across in his 1908 paper where he describes this as "very simple".

To the Editor of Science: I am reluctant to intrude in a discussion concerning matters of which I have no expert knowledge, and I should have expected the very simple point which I wish to make to have been familiar to biologists. However, some remarks of Mr. Udny Yule, to which Mr. R. C. Punnett has called my attention, suggest that it may still be worth making...

Suppose that Aa is a pair of Mendelian characters, A being dominant, and that in any given generation the number of pure dominants (AA), heterozygotes (Aa), and pure recessives (aa) are as p:2q:r. Finally, suppose that the numbers are fairly large, so that mating may be regarded as random, that the sexes are evenly distributed among the three varieties, and that all are equally fertile. A little mathematics of the multiplication-table type is enough to show that in the next generation the numbers will be as (p+q)2:2(p+q)(q+r):(q+r)2, or as p1:2q1:r1, say.

The interesting question is — in what circumstances will this distribution be the same as that in the generation before? It is easy to see that the condition for this is q2 = pr. And since q12 = p1r1, whatever the values of p, q, and r may be, the distribution will in any case continue unchanged after the second generation

The principle was thus known as Hardy's law in the English-speaking world until 1943, when Curt Stern pointed out that it had first been formulated independently in 1908 by the German physician Wilhelm Weinberg.[2][3] Others have attempted to associate Castle's name with the Law because of his work in 1903, but it is only rarely seen as the Hardy–Weinberg–Castle Law.

The derivation of Hardy’s equations is illustrative. He begins with a population of genotypes consisting of pure dominants (AA), heterozygotes (Aa), and pure recessives (aa) in the relative proportions p:2q:r with the conditions noted above, that is,

for generations after the first. For a putative third generation,

Substituting for p1 and q1 and factoring out (p + q)2 yields,

The quantity in brackets is equal to 1, therefore, p2 = p1 and will remain so for succeeding generations. The result will be the same for the other two genotypes. 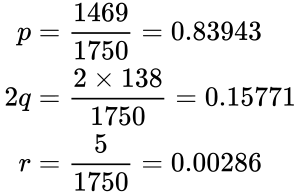 As checks on the distribution, compute

For the next generation, Hardy's equations give, 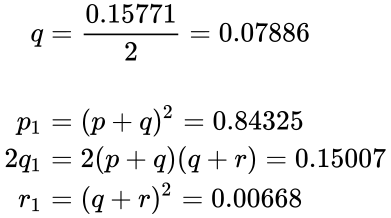 Again as checks on the distribution, compute

which are the expected values. The reader may demonstrate that subsequent use of the second-generation values for a third generation will yield identical results.

It is possible to represent the distribution of genotype frequencies for a bi-allelic locus within a population graphically using a de Finetti diagram. This uses a triangular plot (also known as trilinear, triaxial or ternary plot) to represent the distribution of the three genotype frequencies in relation to each other. Although it differs from many other such plots in that the direction of one of the axes has been reversed.

It is possible to represent the effects of Natural Selection and its effect on allele frequency on such graphs (e.g. Ineichen & Batschelet 1975)

The de Finetti diagram has been developed and used extensively by A. W. F. Edwards in his book Foundations of Mathematical Genetics.