The hands (med./lat.: manus, pl. manūs) are the two intricate, prehensile, multi-fingered body parts normally located at the end of each arm of a human or other primate. They are the chief organs for physically manipulating the environment, using anywhere from the roughest motor skills (wielding a club) to the finest (threading a needle), and since the fingertips contain some of the densest areas of nerve endings on the human body, they are also the richest source of tactile feedback so that sense of touch is intimately associated with human hands. Like other paired organs (eyes, ears, legs), each hand is dominantly controlled by the opposing brain hemisphere, and thus handedness, or preferred hand choice for single-handed activities such as writing with a pen, reflects a significant individual trait.

What constitutes a hand? Edit

Many mammals and other animals have grasping appendages similar in form to a hand such as paws, claws, and talons, but these are not scientifically considered to be hands. The scientific use of the term hand to distinguish the terminations of the front paws from the hind ones is an example of anthropomorphism. The only true hands appear in the mammalian order of primates. Hands must also have opposable thumbs, as described later in the text.

Humans have only two hands (except in cases of polymelia),[1] which are attached to the arms. Apes and monkeys are sometimes described as having four hands, because the toes are long and the hallux is opposable and looks more like a thumb, thus enabling the feet to be used as hands. Also, some apes have toes that are longer than human fingers.[2]

Anatomy of the human hand Edit

The human hand consists of a broad palm (metacarpus) with 5 digits, attached to the forearm by a joint called the wrist (carpus).[3][4] The back of the hand is formally called the dorsum of the hand.

The four fingers on the hand are used for the outermost performance; these four digits can be folded over the palm which allows the grasping of objects. Each finger, starting with the one closest to the thumb, has a colloquial name to distinguish it from the others:

The thumb (connected to the trapezium) is located on one of the sides, parallel to the arm. The thumb can be easily rotated 90°, on a level perpendicular to the palm, unlike the other fingers which can only be rotated approximately 45°[How to reference and link to summary or text]. A reliable way of identifying true hands is from the presence of opposable thumbs. Opposable thumbs are identified by the ability to be brought opposite to the fingers, a muscle action known as opposition.

The human hand has 27 bones: the carpus or wrist account for 8; the metacarpus or palm contains 5; the remaining 14 are digital bones; fingers and thumb. The eight bones of the wrist are arranged in two rows of four. These bones fit into a shallow socket formed by the bones of the forearm. The bones of proximal row are (from lateral to medial): scaphoid, lunate, triquetral and pisiform.

The bones of the distal row are (from lateral to medial): trapezium, trapezoid, capitate and hamate. The palm has 5 bones (metacarpals), one to each of the 5 digits. These metacarpals have a head and a shaft.

Human hands contain 14 digital bones, also called phalanx bones: 2 in the thumb (the thumb has no middle phalanx) and 3 in each of the four fingers. These are:

Sesamoid bones are small ossified nodes embedded in the tendons to provide extra leverage and reduce pressure on the underlying tissue. Many exist around the palm at the bases of the digits; the exact number varies between different people.

Also of note is that the articulation of the human hand is more complex and delicate than that of comparable organs in any other animals. Without this extra articulation, we would not be able to operate a wide variety of tools and devices. The hand can also form a fist, for example in combat, or as a gesture.

The intrinsic muscle groups are the thenar and hypothenar muscles (thenar referring to the thumb, hypothenar to the small finger), the interosseus muscles (between the metacarpal bones, four dorsally and three volarly) and the lumbrical muscles. These muscles arise from the deep flexor (and are special because they have no bony origin) and insert on the dorsal extensor hood mechanism.

The fingers have two long flexors, located on the underside of the forearm. They insert by tendons to the phalanges of the fingers. The deep flexor attaches to the distal phalanx, and the superficial flexor attaches to the middle phalanx. The flexors allow for the actual bending of the fingers. The thumb has one long flexor and a short flexor in the thenar muscle group. The human thumb also has other muscles in the thenar group (opponens- and abductor muscle), moving the thumb in opposition, making grasping possible.

Some people have more than the usual number of fingers or toes, a condition called polydactyly.[5] Others may have more than the typical number of metacarpal bones, a condition often caused by genetic disorders like Catel-Manzke syndrome. The average length of an adult male hand is 189 mm, while the averrage length of an adult female hand is 172 mm. The average hand breadth for adult males and females is 84 and 74 mm respectively.[6] 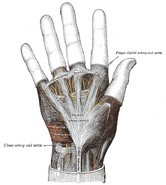 HandAnthropometry.JPG
Static adult human physical characteristics of the hand.
Add a photo to this gallery