The fornix is also the name of part of the cervix.

The fornix is a C-shaped bundle of fibres (axons) in the brain, and carries signals from the hippocampus to the mammillary bodies, septal nuclei and the anterior nucleus of the thalmus.

When the body is formed from the two crura (sing. crus), there is a small number of fibres that cross over to the other side at what is called the hippocampal commissure. Most fibres stay on their original side.

The body of the fornix travels anteriorly and divides again near the anterior commissure. The left and right parts reseparate, but there is also an anterior/posterior divergence. The posterior fibres (called the postcommissural fornix) of each side continue through the hypothalamus to the mammillary bodies. The anterior fibers (precommissural fornix) end at the septal nuclei of each half of the brain. 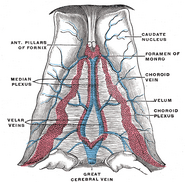 Medial aspect of a brain sectioned in the median sagittal plane. 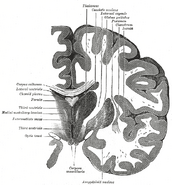 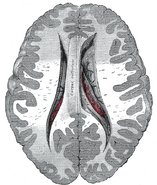 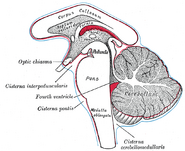 Diagram showing the positions of the three principal subarachnoid cisternæ.