Folic acid and folate (the anion form) are forms of the water-soluble Vitamin B9. These occur naturally in food and can also be taken as supplements. Folate gets its name from the Latin word folium ("leaf").

Leaf vegetables such as spinach and turnip greens, dried beans and peas, fortified cereal products, sunflower seeds and certain other fruits and vegetables are rich sources of folate, as is liver. Some breakfast cereals (ready-to-eat and others) are fortified with 25% to 100% of the recommended dietary allowance (RDA) for folic acid. A table of selected food sources of folate and folic acid can be found at the USDA National Nutrient Database for Standard Reference.

Recent debate has emerged in the United Kingdom[1] and Australia[2]regarding the inclusion of folic acid in products such as bread and flour. Experts claim that this will decrease the number of babies with disabilities such as spina bifida. Research suggests high levels of folic acid can interfere with some antimalarial treatments.[3]

A key observation by researcher Lucy Wills in 1931 led to the identification of folate as the nutrient needed to prevent the anemia during pregnancy. Dr. Wills demonstrated that anemia could be reversed with brewer's yeast. Folate was identified as the corrective substance in brewer's yeast in the late 1930s and was extracted from spinach leaves in 1941. It was first synthesised in 1946.

Folate is necessary for the production and maintenance of new cells.[4] This is especially important during periods of rapid cell division and growth such as infancy and pregnancy. Folate is needed to replicate DNA. Thus folate deficiency hinders DNA synthesis and cell division, affecting most clinically the bone marrow, a site of rapid cell turnover. Because RNA and protein synthesis are not hindered, large red blood cells called megaloblasts are produced, resulting in megaloblastic anemia.[5] Both adults and children need folate to make normal red blood cells and prevent anemia.[6]

Folate also helps prevent changes to DNA that may lead to cancer.

In the form of a series of tetrahydrofolate compounds, folate derivatives are substrates in a number of single-carbon-transfer reactions, and also are involved in the synthesis of dTMP (2'-deoxythymidine-5'-phosphate) from dUMP (2'-deoxyuridine-5'-phosphate). It helps convert vitamin B12 to one of its coenzyme forms and helps synthesize the DNA required for all rapidly growing cells. 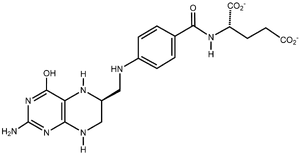 The Reference Daily Intake (RDI) is the average daily dietary intake level that is sufficient to meet the nutrient requirements of nearly all (97% to 98% of) healthy individuals in each life-stage and gender group. The 1998 RDIs for folate are expressed in a term called the "dietary folate equivalent" (DFE). This was developed to help account for the differences in absorption of naturally-occurring dietary folate and the more bioavailable synthetic folic acid.[8] The 1998 RDAs for folate expressed in micrograms (µg) of DFE for adults are:

The National Health and Nutrition Examination Survey (NHANES III 1988-91) and the Continuing Survey of Food Intakes by Individuals (1994-96 CSFII) indicated that most adults did not consume adequate folate.[9][10] However, the folic acid fortification program in the United States has increased folic acid content of commonly eaten foods such as cereals and grains, and as a result diets of most adults now provide recommended amounts of folate equivalents.[11]

Folic acid is very important for all women who may become pregnant. Adequate folate intake during the periconceptional period, the time just before and just after a woman becomes pregnant, helps protect against a number of congenital malformations including neural tube defects.[12] Neural tube defects result in malformations of the spine (spina bifida), skull, and brain (anencephaly). The risk of neural tube defects is significantly reduced when supplemental folic acid is consumed in addition to a healthy diet prior to and during the first month following conception.[13][14] Women who could become pregnant are advised to eat foods fortified with folic acid or take supplements in addition to eating folate-rich foods to reduce the risk of some serious birth defects. Taking 400 micrograms of synthetic folic acid daily from fortified foods and/or supplements has been suggested. The Recommended Dietary Allowance (RDA) for folate equivalents for pregnant women is 600 micrograms.

Folic acid supplements and masking of B12 deficiency[edit | edit source]

However one recent study has demonstrated that high folic or folate levels when combined with low B12 levels are associated with significant cognitive impairment among the elderly, [17]. If the observed relationship for seniors between folic acid intake, B12 levels, and cognitive impairment is replicated and confirmed, this is likely to re-open the debate on folic acid fortification in food. While public health policies tend generally to support the developmental needs of infants and children over slight risks to other population groups, the ratio of benefit in this case is likely to be on the scale of one child's life saved versus impairment of hundreds or thousands of seniors.

In any case, it is important for older adults to be aware of the relationship between folic acid and vitamin B12 because they are at greater risk of having a vitamin B12 deficiency. If you are 50 years of age or older, ask your physician to check your B12 status before you take a supplement that contains folic acid.

Health risk of too much folic acid[edit | edit source]

The risk of toxicity from folic acid is low.[18] The Institute of Medicine has established a tolerable upper intake level (UL) for folate of 1 mg for adult men and women, and a UL of 800 µg for pregnant and lactating (breast-feeding) women less than 18 years of age. Supplemental folic acid should not exceed the UL to prevent folic acid from masking symptoms of vitamin B12 deficiency.[19]

Some current issues and controversies about folate[edit | edit source]

Since the discovery of the link between insufficient folic acid and neural tube defects (NTDs), governments and health organisations worldwide have made recommendations concerning folic acid supplementation for women intending to become pregnant. For example, the United States Public Health Service (see External links) recommends an extra 0.4 mg/day, which can be taken as a pill. However, many researchers believe that supplementation in this way can never work effectively enough since about half of all pregnancies in the U.S. are unplanned and not all women will comply with the recommendation.

This has led to the introduction in many countries of fortification, where folic acid is added to flour with the intention of everyone benefiting from the associated rise in blood folate levels. This is not uncontroversial, with issues having been raised concerning individual liberty, and the masking effect of folate fortification on pernicious anaemia (vitamin B12 deficiency). However, most North and South American countries now fortify their flour, along with a number of Middle Eastern countries and Indonesia. Mongolia and a number of ex-Soviet republics are amongst those having widespread voluntary fortification; about five more countries (including Morocco, the first African country) have agreed but not yet implemented fortification. Previously, the UK had decided not to fortify, mainly because of the vitamin B12 concern. However, this decision is currently being reconsidered by the Food Standards Agency. Thus far, no EU country has yet fortified. Australia is considering fortification, but a period for comments ending 2006-07-31 attracted strong opposition from industry as well as academia.[20]

In 1996, the United States Food and Drug Administration (FDA) published regulations requiring the addition of folic acid to enriched breads, cereals, flours, corn meals, pastas, rice, and other grain products.[21][22] This ruling took effect 1998-01-01, and was specifically targeted to reduce the risk of neural tube birth defects in newborns.[23] There are concerns that the amount of folate added is insufficient[2]. In October 2006, the Australian press claimed that U.S. regulations requiring fortification of grain products were being interpreted as disallowing fortification in non-grain products, specifically Vegemite (an Australian yeast extract containing folate). The FDA later said the report was inaccurate, and no ban or other action was being taken against Vegemite.[3]

Since the folic acid fortification program took effect, fortified foods have become a major source of folic acid in the American diet. The Centers for Disease Control and Prevention in Atlanta, Georgia used data from 23 birth defect registries that cover about half of United States births and extrapolated their findings to the rest of the country. This data indicates that since the addition of folic acid in grain-based foods as mandated by the Food and Drug Administration, the rate of neural tube defects dropped by 25 percent in the United States.[24]

Although folic acid does reduce the risk of birth defects, it is only one part of the picture and should not be considered a cure. Even women taking daily folic acid supplements have been known to have children with neural tube defects.

Low concentrations of folate, vitamin B12, or vitamin B6 may increase your level of homocysteine, an amino acid normally found in your blood. There is evidence that an elevated homocysteine level is an independent risk factor for heart disease and stroke.[25] The evidence suggests that high levels of homocysteine may damage coronary arteries or make it easier for blood clotting cells called platelets to clump together and form a clot.[26] However, there is currently no evidence available to suggest that lowering homocysteine with vitamins will reduce your risk of heart disease. Clinical intervention trials are needed to determine whether supplementation with folic acid, vitamin B12 or vitamin B6 can lower your risk of developing coronary heart disease. The NORVIT trialsuggests that folic acid supplementation may do more harm than good.

As of 2006, studies have shown that giving folic acid to reduce levels of homocysteine does not result in clinical benefit and suggests that in combination with B12 may even increase some cardiovascular risks.[27][28][29]

Some evidence associates low blood levels of folate with a greater risk of cancer.[30] Folate is involved in the synthesis, repair, and functioning of DNA, our genetic map, and a deficiency of folate may result in damage to DNA that may lead to cancer.[31] Several studies have associated diets low in folate with increased risk of breast, pancreatic, and colon cancer.[32] Findings from a study of over 121,000 nurses suggested that long-term folic acid supplementation (for 15 years) was associated with a decreased risk of colon cancer in women 55 to 69 years of age.[33]

"Folate intake counteracts breast cancer risk associated with alcohol consumption"[34] and "women who drink alcohol and have a high folate intake are not at increased risk of cancer".[35] Those who have a high (200 micrograms or more per day) level of folate (folic acid or Vitamin B9) in their diet are not at increased risk of breast cancer compared to those who abstain from alcohol.[36]

However, associations between diet and disease do not indicate a direct cause. Researchers are continuing to investigate whether enhanced folate intake from foods or folic acid supplements may reduce the risk of cancer.

Folate is important for cells and tissues that rapidly divide.[4] Cancer cells divide rapidly, and drugs that interfere with folate metabolism are used to treat cancer. Methotrexate is a drug often used to treat cancer because it inhibits the production of the active form, tetrahydrofolate. Unfortunately, methotrexate can be toxic,[37][38][39] producing side effects such as inflammation in the digestive tract that make it difficult to eat normally.

Some evidence links low levels of folate with depression.[46] There is some limited evidence from randomised controlled trials that using folic acid in addition to antidepressant medication may have benefits.[47] However, the evidence is probably too limited at present for this to be a routine treatment recommendation.

In a 3-year trial on 818 people over the age of 50, short-term memory, mental agility and verbal fluency were all found to be better among people who took 800 micrograms of folic acid daily—a high dose—than those who took placebo. The study was reported in The Lancet on 19 January 2007. [48] (free registration required)

Retrieved from "https://psychology.wikia.org/wiki/Folic_acid?oldid=173080"
Community content is available under CC-BY-SA unless otherwise noted.