All fluorescence microscopy methods share the same principle. A sample is illuminated with light of a wavelength which excites fluorescence in the sample. The fluoresced light, which is usually at a longer wavelength than the illumination, is then imaged through a microscope objective. Two filters are normally used in this technique; an illumination (or excitation) filter which ensures the illumination is near monochromatic and at the correct wavelength, and a second emission (or barrier) filter which ensures none of the excitation light source reaches the detector. These functions may both be accomplished by a single dichroic filter. Fluorescence microscopy takes a fundamentally different approach to generating a light microscope image compared to transmitted or reflected white light techniques such as phase contrast and differential interference contrast microscopy. These two contrasting optical microscopy methods give very different but complementary data.

The specimen is illuminated with light of a specific wavelength (or wavelengths) which is absorbed by the fluorophores, causing them to emit light of longer wavelengths (i.e., of a different color than the absorbed light). The illumination light is separated from the much weaker emitted fluorescence through the use of a spectral emission filter. Typical components of a fluorescence microscope are a light source (xenon arc lamp or mercury-vapor lamp), the excitation filter, the dichroic mirror (or dichroic beamsplitter), and the emission filter (see figure below). The filters and the dichroic are chosen to match the spectral excitation and emission characteristics of the fluorophore used to label the specimen.[1] In this manner, the distribution of a single fluorophore (color) is imaged at a time. Multi-color images of several types of fluorophores must be composed by combining several single-color images.[1]

Many fluorescent stains have been designed for a range of biological molecules. Some of these are small molecules which are intrinsically fluorescent and bind a biological molecule of interest. Major examples of these are nucleic acid stains like DAPI and Hoechst which bind the minor groove of DNA, thus labelling the nuclei of cells. Others are drugs or toxins which bind specific cellular structures and have been derivatised with a fluorescent reporter. A major example of this class of fluorescent stain is fluorescently labelled-phalloidin which is used to stain actin fibres in mammalian cells.

There are many fluorescent reported molecules, called fluorophores or fluorochromes such as fluorescein, Alexa Fluors or DyLight 488, which can be chemically linked to a different molecule which binds the target of interest within the sample.

The modern understanding of genetics and the techniques available for modifying DNA allows scientists to genetically modify proteins to also carry a fluorescent protein reporter. In biological samples this allows a scientist to directly make a protein of interest fluorescent. The protein location can then be directly tracked, including in live cells.

Fluorophores lose their ability to fluoresce as they are illuminated in a process called photobleaching. Photobleaching occurs as the fluorescent molecules accumulate chemical damage from the electrons excited during fluorescence. Photobleaching can severely limit the time over which a sample can be observed by fluorescent microscopy. Several techniques exist to reduce photobleaching such as the use of more robust fluorophores, by minimizing illumination, or by using photoprotective scavenger chemicals.

The wave nature of light limits the size of the spot to which light can be focused due to the diffraction limit. This limitation was described in the 19th century by Ernst Abbe and limits an optical microscope's resolution to approximately half of the wavelength of the light used. Fluorescence microscopy is central to many techniques which aim to reach past this limit by specialised optical configurations.

Several improvements in microscopy techniques have been invented in the 20th century and have resulted in increased resolution and contrast to some extent. However they did not overcome the diffraction limit. In 1978 first theoretical ideas have been developed to break this barrier by using a 4Pi microscope as a confocal laser scanning fluorescence microscope where the light is focused ideally from all sides to a common focus which is used to scan the object by 'point-by-point' excitation combined with 'point-by-point' detection.[3] However, the first experimental demonstration of the 4pi microscope took place in 1994.[4] 4Pi microscopy maximizes the amount of available focusing directions by using two opposing objective lenses or Multi-photon microscopy using redshifted light and multi-photon excitation.

The first technique to really achieve a sub-diffraction resolution was STED microscopy, proposed in 1994. This method and all techniques following the RESOLFT concept rely on a strong non-linear interaction between light and fluorescing molecules. The molecules are driven strongly between distinguishable molecular states at each specific location, so that finally light can be emitted at only a small fraction of space, hence an increased resolution.

As well in the 1990s another super resolution microscopy method based on wide field microscopy has been developed. Substantially improved size resolution of cellular nanostructures stained with a fluorescent marker was achieved by development of SPDM localization microscopy and the structured laser illumination (spatially modulated illumination, SMI).[5] Combining the principle of SPDM with SMI resulted in the development of the Vertico SMI microscope.[6][7] Single molecule detection of normal blinking fluorescent dyes like Green fluorescent protein (GFP) can be achieved by using a further development of SPDM the so-called SPDMphymod technology which makes it possible to detect and count two different fluorescent molecule types at the molecular level (this technology is referred to as 2CLM, 2 Color Localization Microscopy).[8]

Alternatively, the advent of photoactivated localization microscopy could achieve similar results by relying on blinking or switching of single molecules, where the fraction of fluorescing molecules is very small at each time. This stochastic response of molecules on the applied light corresponds also to a highly nonlinear interaction, leading to subdiffraction resolution.

Dividing Cell Fluorescence.jpg
Epifluorescent imaging of the three components in a dividing human cancer cell. DNA is stained blue, a protein called INCENP is green, and the microtubules are red. Each fluorophore is imaged separately using a different combination of excitation and emission filters, and the images are captured sequentially using a digital CCD camera, then overlaid to give a complete image. 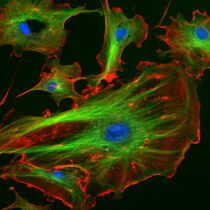 Retrieved from "https://psychology.wikia.org/wiki/Fluorescence_microscope?oldid=145350"
Community content is available under CC-BY-SA unless otherwise noted.