An F test is any statistical test in which the test statistic has an F-distribution if the null hypothesis is true. The name was coined by George W. Snedecor, in honour of Sir Ronald A. Fisher. Fisher initially developed the statistic as the variance ratio in the 1920s[1]. Examples include:

Note that if it is equality of variances (or standard deviations) that is being tested, the F-test is extremely non-robust to non-normality. That is, even if the data displays only modest departures from the normal distribution, the test is unreliable and should not be used.

(Note: When there are only two groups for the F-test: F-ratio = t2 where t is the Student's t statistic.)

In many cases, the F-test statistic can be calculated through a straightforward process. In the case of regression: consider two models, 1 and 2, where model 1 is nested within model 2. That is, model 1 has p1 parameters, and model 2 has p2 parameters, where p2 > p1. (Any constant parameter in the model is included when counting the parameters. For instance, the simple linear model y = mx + b has p = 2 under this convention.) If there are n data points to estimate parameters of both models from, then calculate F as 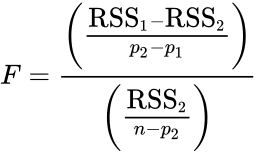 where RSSi is the residual sum of squares of model i. If your regression model has been calculated with weights, then replace RSSi with χ2, the weighted sum of squared residuals. F here is distributed as an F-distribution, with (p2 − p1, n − p2) degrees of freedom; the probability that the decrease in χ2 associated with the addition of p2 − p1 parameters is solely due to chance is given by the probability associated with the F distribution at that point. The null hypothesis, that none of the additional p2 − p1 parameters differs from zero, is rejected if the calculated F is greater than the F given by the critical value of F for some desired rejection probability (e.g. 0.05).

A table of F-test critical values can be found here and is usually included in most statistical texts.

a1, a2, and a3 are the three levels of the factor that your are studying. To calculate the F- Ratio:

Step 1: calculate the Ai values where i refers to the number of the condition. So:

Step 2: calculate ȲAi being the average of the values of condition ai

= the number of conditions and

= the number of participants in each condition.

This is every score in every condition squared and then summed.

Step 5 the Degrees of Freedom are now calculated:

Step 8 look up the Fcrit value for the problem:

Retrieved from "https://psychology.wikia.org/wiki/F_test?oldid=89130"
Community content is available under CC-BY-SA unless otherwise noted.