Emil Kraepelin (February 15 1856 – October 7 1926) was a German psychiatrist. He is often credited with being the founder of modern scientific psychiatry, psychopharmacology and psychiatric genetics. He is recorded as such by the eminent psychologist H. J. Eysenck in his Encyclopedia of Psychology.

Kraepelin said that psychiatric diseases are mainly caused by biological and genetic disorders. His psychiatric theories dominated the field of psychiatry at the beginning of the twentieth century, and have again, in their essence, since its end. Kraepelin opposed the approach of Sigmund Freud who regarded and treated psychiatric disorders as caused by psychological factors, rooted in perception and thought. 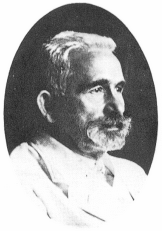 Creation of a Disgnostic System[]

In 1886, at the age of 30 and after only eight years of training, he was appointed to a professorship at the University of Tartu (then Dorpat) in what is today Estonia and became the director of an eighty-bed University Clinic. There he was able to study and record many clinical histories in detail and "was led to consider the importance of the course of the illness with regard to the classification of mental disorders."

Ten years later he announced that he had found a new way of looking at mental illness. He referred to the traditional view as "symptomatic" and to his view as "clinical". This turned out to be his paradigm-setting synthesis of the hundreds of mental disorders classified by the 19th century, grouping diseases together based on classification of syndromes -common patterns of symptoms- rather than by simple similarity of major symptoms in the manner of his predecessors. In fact, it was precisely because of the demonstrated inadequacy of such methods that Kraepelin developed his new diagnostic system.

One of the cardinal principles of his method was the recognition that any given symptom may appear in virtually any one of these disorders; e.g., there is almost no single symptom occurring in dementia praecox which cannot sometimes be found in manic-depression. What distinguishes each disease symptomatically (as opposed to the underlying pathology) is not any particular (pathognomonic) symptom or symptoms, but a specific pattern of symptoms. In the absence of a direct physiological or genetic test or marker for each disease, it is only possible to distinguish them by their specific pattern of symptoms. Thus, Kraepelin's system is a method for pattern recognition, not grouping by common symptoms.

Kraepelin is specifically credited with the classification of what was previously considered to be a unitary concept of psychosis, into two distinct forms:

Drawing on his long-term research, and using the criteria of course, outcome and prognosis, he developed the concept of dementia praecox, which he defined as the "sub-acute development of a peculiar simple condition of mental weakness occurring at a youthful age." When he first introduced this concept as a diagnostic entity in the fourth German edition of his Lehrbuch der Psychiatrie in 1893, it was placed among the degenerative disorders alongside, but separate from, catatonia and dementia paranoides. At that time, the concept corresponded by and large with Ewald Hecker's hebephrenia. In the sixth edition of the Lehrbuch in 1899 all three of these clinical types are treated as different expressions of one disease, dementia praecox.

Kraepelin also demonstrated specific patterns in the genetics of these disorders and specific and characteristic patterns in their course and outcome. Generally speaking, there tend to be more schizophrenics among the relatives of schizophrenic patients than in the general population, while manic-depression is more frequent in the relatives of manic-depressives.

He also reported a pattern to the course and outcome of these conditions. Kraepelin believed that schizophrenia had a deteriorating course in which mental function continuously (although perhaps erratically) declines, while manic-depressive patients experienced a course of illness which was intermittent, where patients were relatively symptom-free during the intervals which separate acute episodes. This led Kraepelin to name what we now know as schizophrenia, dementia praecox (the dementia part signifing the irreversible mental decline). (It later became clear that dementia praecox did not necessarily lead to mental decline and so was renamed by Eugene Bleuler to correct the misnomer.)

Kraepelin's great contribution in discovering schizophrenia and manic-depression remains relatively unknown to the general public and his work, which had neither the literary quality nor paradigmatic power of Freud's, is little read outside scholarly circles.

Kraepelin postulated that there is a specific brain or other biological pathology underlying each of the major psychiatric disorders. As a colleague of Alois Alzheimer, and co-discoverer of Alzheimer's disease, it was his laboratory which discovered its pathologic basis. Kraepelin was confident that it would someday be possible to identify the pathologic basis of each of the major psychiatric disorders.

Equally important, but also little known, the method of differential diagnosis was first suggested for use in the diagnosis of mental disorders by Emil Kraepelin. It is more systematic than the old-fashioned method of diagnosis by gestalt (impression).

Kraepelin's contributions were to a good extent marginalized throughout a good part of the twentieth century, during the success of Freudian etiological theories. However, his views now dominate psychiatric research and academic psychiatry, and today the published literature in the field of psychiatry is overwhelmingly biological in its orientation. Kraepelin's fundamental theories on the etiology and diagnosis of psychiatric disorders form the basis of all major diagnostic systems in use today, especially the American Psychiatric Association's Diagnosistic Statistical Manual and the World Health Organization's ICD system. The diagnostic approaches exemplified by these two nomenclatures are very similar to one another and represent a return to descriptive psychiatry in which careful observation of symptoms, signs, and course of mental diseases become the diagnostic criteria themselves. In that sense, Kraepelin's significance is not only historical, but contemporary scientific psychiatry is directly based on his findings and theories.

In many ways, these newest classification schemata can be considered a return to phenomenological psychiatry perhaps best exemplified at the start of this century by Emil Kraepelin. Thus, recent developments in psychiatric diagnosis can be thought of as neo-Kraepelinian. Because they represent a relatively radical change from psychodynamic approaches to evaluation and diagnosis, they can also be called revolutionary.