Consumer theory is a theory of economics. It relates preferences (through indifference curves and budget constraints) to consumer demand curves. The models that make up consumer theory are used to represent prospectively observable demand patterns for an individual buyer on the hypothesis of constrained optimization.

For an individual, indifference curves and an assumption of constant prices and a fixed income in a two-good world will give the following diagram. The consumer can choose any point on or below the budget constraint line BC. This line is diagonal since it comes from the equation

. In other words, the amount spent on both goods together is less than or equal to the income of the consumer. The consumer will choose the indifference curve with the highest utility that is within the budget constraint. I3 has all the points outside of their budget constraint so the best that the consumer can do is I2. This will result in them purchasing X* of good X and Y* of good Y. 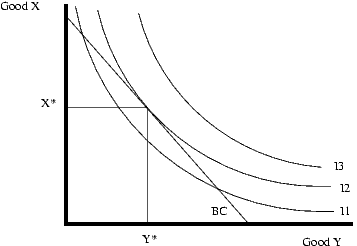 Income effect and price effect deal with how the change in price of a commodity changes the consumption of the good. The theory of consumer choice examines the trade-offs and decisions people make in their role as consumers as prices and their income changes.

These curves can be used to predict the effect of changes to the budget constraint. The graphic below shows the effect of a price shift for good Y. If the price of Y increases, the budget constraint will shift from BC2 to BC1. Notice that because the price of X does not change, the consumer can still buy the same amount of X if he or she chooses to buy only good X. On the other hand, if the consumer chooses to buy only good Y, he or she will be able to buy less of good Y because its price has increased.

To maximize the utility with the reduced budget constraint, BC1, the consumer will re-allocate consumption to reach the highest available indifference curve which BC1 is tangent to. As shown on the diagram below, that curve is I1, and therefore the amount of good Y bought will shift from Y2 to Y1, and the amount of good X bought to shift from X2 to X1. The opposite effect will occur if the price of Y decreases causing the shift from BC2 to BC3, and I2 to I3. 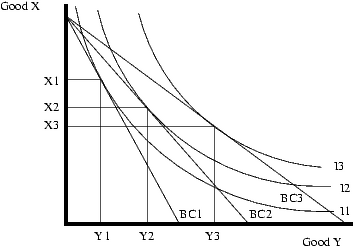 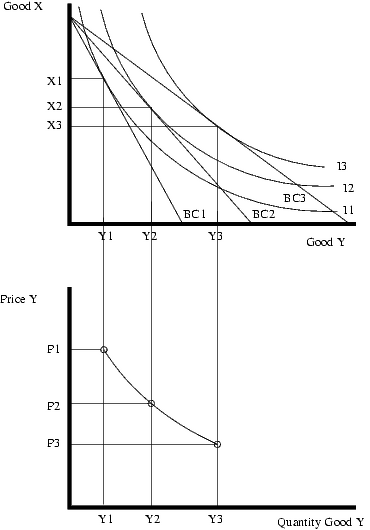 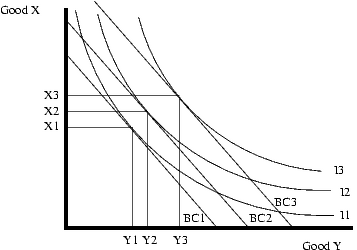 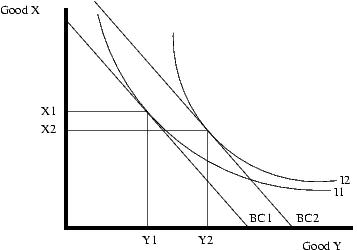 , holding the price of good 1 fixed at 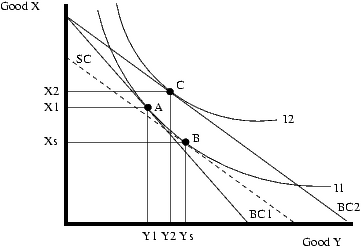 , is the change in the demand for good 1 when the price of good 1 changes to

and, at the same time, the money income changes to

The previous model of consumer choice theory is applicable with only slight modifications. First, the total amount of time that an individual has to allocate is known as her time endowment, and is often denoted as T. The amount an individual allocates to labor (denoted L) and leisure (l) is constrained by T such that:

A person's consumption is the amount of labor they choose multiplied by the amount they are paid per hour of labor (their wage, often denoted w). Thus, the amount that a person consumes is:

When a consumer chooses no leisure

From this labor-leisure tradeoff model, the substitution and income effects of various changes in price caused by welfare benefits, labor taxation, or tax credits can be analyzed.

Retrieved from "https://psychology.wikia.org/wiki/Consumer_theory?oldid=52919"
Community content is available under CC-BY-SA unless otherwise noted.