Complex adaptive systems are special cases of complex systems. They are complex in that they are diverse and made up of multiple interconnected elements and adaptive in that they have the capacity to change and learn from experience. The term complex adaptive systems was coined at the interdisciplinary Santa Fe Institute (SFI), by John H. Holland, Murray Gell-Mann and others. John H. Holland is one of the inventors of evolutionary computation and genetic algorithms. Nobel Prize laureate Murray Gell-Mann discovered quarks.

The term complex adaptive systems (or complexity science) is often used to describe the loosely organized academic field that has grown up around the study of such systems. Complexity science is not a single theory— it encompasses more than one theoretical framework and is highly interdisciplinary, seeking the answers to some fundamental questions about living, adaptable, changeable systems.

Examples of complex adaptive systems include the stock market, social insect and ant colonies, the biosphere and the ecosystem, the brain and the immune system, the cell and the developing embryo, manufacturing businesses and any human social group-based endeavour in a cultural and social system such as political parties or communities. There are close relationships between the field of CAS and artificial life. In both areas the principles emergence and self-organization are very important.

A CAS is a complex, self-similar collection of interacting adaptive agents. The study of CAS focuses on complex, emergent and macroscopic properties of the system. Various definitions have been offered by different researchers:

A Complex Adaptive System (CAS) is a dynamic network of many agents (which may represent cells, species, individuals, firms, nations) acting in parallel, constantly acting and reacting to what the other agents are doing. The control of a CAS tends to be highly dispersed and decentralized. If there is to be any coherent behavior in the system, it has to arise from competition and cooperation among the agents themselves. The overall behavior of the system is the result of a huge number of decisions made every moment by many individual agents. (source: Complexity: The Emerging Science at the Edge of Order and Chaos by M. Mitchell Waldrop)

A CAS behaves/evolves according to three key principles: order is emergent as opposed to predetermined (c.f. Neural Networks), the system's history is irreversible, and the system's future is often unpredictable. The basic building blocks of the CAS are agents. Agents scan their environment and develop schema representing interpretive and action rules. These schema are subject to change and evolution. (source: K. Dooley, AZ State University)

Macroscopic collections of simple (and typically nonlinearly) interacting units that are endowed with the ability to evolve and adapt to a changing environment. (source: Complexity in Social Science glossary a research training project of the European Commission)

What distinguishes a CAS from a pure multi-agent system (MAS) is the focus on top-level properties and features like self-similarity, complexity, emergence and self-organization. A MAS is simply defined as a system composed of multiple, interacting agents. In CASs, the agents as well as the system are adaptive: the system is self-similar. A CAS is a complex, self-similar collectivity of interacting adaptive agents.

Other important properties are adaptation (or homeostasis), communication, cooperation, specialization, spatial and temporal organization, and of course reproduction. They can be found on all levels: cells specialize, adapt and reproduce themselves just like larger organisms do. Communication and cooperation take place on all levels, from the agent to the system level. 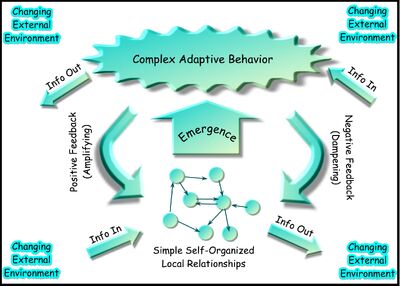 Retrieved from "https://psychology.wikia.org/wiki/Complex_adaptive_system?oldid=20638"
Community content is available under CC-BY-SA unless otherwise noted.