Cellular respiration is the process in which the chemical bonds of energy-rich molecules such as glucose are converted into energy usable for life processes. Oxidation of organic material—in a bonfire, for example—is an exothermic reaction that releases a large amount of energy rather quickly. The equation for the oxidation of glucose is:

In a fire there is a massive uncontrolled release of energy as light and heat. Cellular respiration is the same process but it occurs in gradual steps that result in the conversion of the energy stored in glucose to usable chemical energy in the form of ATP. 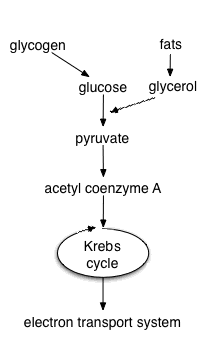 Aerobic respiration requires oxygen in order to generate energy. It is the preferred method of pyruvate breakdown from glycolysis and requires that pyruvate enter the mitochondrion to be fully oxidized by the Krebs cycle. The product of this process is energy in the form of ATP (Adenosine Triphosphate), by substrate-level phosphorylation, NADH and FADH2. The reducing potential of NADH and FADH2 is converted to more ATP via an electron transport chain with oxygen as the "terminal electron acceptor". Most of the ATP produced by cellular respiration is by oxidative phosphorylation, ATP molecules are made due to the chemiosmotic potential driving ATP synthase. Respiration is the process by which cells obtain energy when oxygen is present in the cell.

Theoretically, 36 ATP molecules can be made per glucose during cellular respiration, however, such conditions are generally not realized due to such losses as the cost of moving pyruvate into mitochondria. Aerobic metabolism is rather more efficient than anaerobic metabolism. They share the initial pathway of glycolysis but aerobic metabolism continues with the Krebs cycle and oxidative phosphorylation. The post glycolytic reactions take place in the mitochondria in eukaryotic cells, and at the cell membrane in prokaryotic cells.

Glycolysis is a metabolic pathway that is found in all living organisms and does not require oxygen. The process converts one molecule of glucose into two molecules of pyruvate, and makes energy in the form of two net molecules of ATP. Four molecules of ATP per glucose are actually produced but two are consumed for the preparatory phase. The initial phosphorylation of glucose is required to destablise the molecule for cleavage into two triose sugars. During the pay-off phase of glycolysis four phosphate groups are transfered to ADP by substrate-level phosphorylation to make four ATP and two NADH are produced when the triose sugars are oxidised. Glycolysis takes place in the cytoplasm of the cell. The overall reaction can be expressed this way:

When oxygen is present, acetyl-CoA enters the citric acid cycle, and gets oxidised to CO2 while at the same time reducing NAD to NADH. NADH can be used by the electron transport chain to create further ATP as part of oxidative phosphorylation. To fully oxidise the equivalent of one glucose molecule two acetyl-CoA must be metabolised by the Krebs cycle. Two waste products, H2O and CO2 are created during this cycle, .

In eukaryotes, oxidative phosphorylation occurs in the mitochondria. It comprises of the electron transport chain that establishes a proton gradient (chemiosmotic potential) across the inner membrane by oxidising the NADH produced from the Krebs cycle. ATP is synthesised by the ATP synthase enzyme when the chemiosmotic gradient is used to drive the phosphorylation of ADP.

The yields in the table below are for one glucose and molecule being fully oxidised to carbon dioxide. It is assumed that all the reduced coenzymes are oxidised by the electron transport chain and used for oxidative phosphorylation.

Although there is a theoretical yield 36 ATP molecules per glucose during cellular respiration, such conditions are generally not realized due to losses such as the cost of moving pyruvate (from glycolysis), phosphate and ADP (substrates for ATP syhthesis) into the mitochondria. All are actively transported using carriers that utilise the stored energy in the proton electrochemical gradient.

The outcome of these transport processes using the proton electrochemical gradient is that more than 3 H+ are needed to make 1 ATP. Obviously this reduces the theoretical efficiency of the whole process. Other factors may also dissipate the proton gradient creating an apparently leaky mitochondria. An uncoupling protein known as thermogenin is expressed in some cell types and is a channel that can transport protons. When this protein is active in the inner membrane it short circuits the coupling between the electron transport chain and ATP synthesis. The potential energy from the proton gradient is not used to make ATP but generates heat. This is particularly important in a babies brown fat, for thermogenesis, and hibernating animals.

In the absence of oxygen, pyruvate is not metabolized by cellular respiration but undergoes fermentation.

Retrieved from "https://psychology.wikia.org/wiki/Cellular_respiration?oldid=6584"
Community content is available under CC-BY-SA unless otherwise noted.