Capillaries /ˈkæpɨlɛriz/ are part of the cardiovascular system and are the smallest of a body's blood vessels and are parts of its microcirculation. Their endothelial linings are only one cell layer thick. These microvessels, measuring 5-10 μm in diameter, connect arterioles and venules, and they help to enable the exchange of water, oxygen, carbon dioxide, and many other nutrients and waste chemical substances between blood and the tissues[1] surrounding them. During embryological development, new capillaries are formed through vasculogenesis, the process of blood vessel formation that occurs by a de novo production of endothelial cells and then their forming into vascular tubes.[2] The term angiogenesis denotes the formation of new capillaries from pre-existing blood vessels.[3]

Blood flows away from a body's heart via arteries, which branch and narrow into arterioles, and then branch further still into capillaries. After their tissues have been perfused, capillaries then join and widen to become venules and then widen more and become veins, which then return blood back to the body's heart.

Capillaries do not function on their own. The capillary bed is an interweaving network of capillaries that supply an organ. The more metabolically active a cell is, the more capillaries they will require to supply nutrients to; and, to be able to carry away the waste products from an organ.

A capillary bed can consist of two types of vessels: true capillaries which branch mainly from metarterioles and provide exchange between cells and a blood's circulation. Secondly, capillary beds also consist of a vascular shunt which is a short vessel that directly connects the arteriole and venule at opposite ends of the bed.

There are three main types of capillaries:

The wall in the capillary is only 1 cell thick and is simple squamous epithelium.[citation needed]

The capillary wall is a one-layer endothelium that allows gas and lipophilic molecules to pass through without the need for special transport mechanisms. This transport mechanism allows bidirectional diffusion depending on osmotic gradients and is further explained by the Starling equation.

Capillary beds may control their blood flow via autoregulation. This allows an organ to maintain constant flow despite a change in central blood pressure. This is achieved by myogenic response, and in the kidney by tubuloglomerular feedback. When blood pressure increases, arterioles are stretched and subsequently constrict (a phenomenon known as the Bayliss effect) to counteract the increased tendency for high pressure to increase blood flow.

In the lungs special mechanisms have been adapted to meet the needs of increased necessity of blood flow during exercise. When the heart rate increases and more blood must flow through the lungs, capillaries are recruited and are also distended to make room for increased blood flow. This allows blood flow to increase while resistance decreases.

Capillary permeability can be increased by the release of certain cytokines, anaphylatoxins, or other mediators (such as leukotrienes, prostaglandins, histamine, bradykinin, etc.) highly influenced by the immune system.

The Starling equation defines the forces across a semipermeable membrane and allows calculation of the net flux:

By convention, outward force is defined as positive, and inward force is defined as negative. The solution to the equation is known as the net filtration or net fluid movement (Jv). If positive, fluid will tend to leave the capillary (filtration). If negative, fluid will tend to enter the capillary (absorption). This equation has a number of important physiologic implications, especially when pathologic processes grossly alter one or more of the variables.

According to Starling's equation, the movement of fluid depends on six variables: 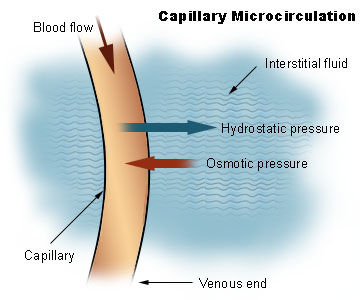 Disorders of capillary formation as a developmental problem or acquired disorder are a feature in many common and serious disorders. Within a wide range of cellular factors and cytokines, problems with normal genetic expression and bioactivity of the vascular growth and permeability factor vascular endothelial growth factor (VEGF) appear to play a major role in many of these disorders. Cellular factors include reduced numbers and function of bone-marrow derived endothelial progenitor cells.[6] and reduced ability of those cells to form blood vessels.[7]

Capillary blood sampling can be used to test for, for example, blood glucose (such as in blood glucose monitoring), hemoglobin, pH and lactate (the two latter can be quantified in fetal scalp blood testing to check the acid base status of a fetus during childbirth).

Capillary blood sampling is generally performed by creating a small cut by a blood lancet, followed by sampling by capillary action on the cut with a test strip or small pipe.

Ibn al-Nafis theorized a "premonition of the capillary circulation in his assertion that the pulmonary vein receives what comes out of the pulmonary artery, this being the reason for the existence of perceptible passages between the two."[11][verification needed]

Marcello Malpighi was the first to observe and correctly describe capillaries when he discovered them in a frog's lung in 1661.[12]

Retrieved from "https://psychology.wikia.org/wiki/Capillaries?oldid=164413"
Community content is available under CC-BY-SA unless otherwise noted.