This muscle serves to empty the canal of the urethra, after the bladder has expelled its contents; during the greater part of the act of micturition its fibers are relaxed, and it only comes into action at the end of the process.

The middle fibers are supposed by Krause to assist in the erection of the corpus cavernosum urethræ, by compressing the erectile tissue of the bulb.

The anterior fibers, according to Tyrrel, also contribute to the erection of the penis by compressing the deep dorsal vein of the penis as they are inserted into, and continuous with, the fascia of the penis.

The bulbospongiosus is placed in the middle line of the perineum, in front of the anus. It consists of two symmetrical parts, united along the median line by a tendinous raphé.

It arises from the central tendinous point of the perineum and from the median raphé in front.

The latter fibers are best seen by dividing the muscle longitudinally, and reflecting it from the surface of the corpus cavernosum urethræ.

Gray407.png
Coronal section of anterior part of pelvis, through the pubic arch. Seen from in front. 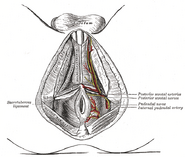 The superficial branches of the internal pudendal artery.
Add a photo to this gallery

Retrieved from "https://psychology.wikia.org/wiki/Bulbospongiosus_muscle?oldid=94008"
Community content is available under CC-BY-SA unless otherwise noted.