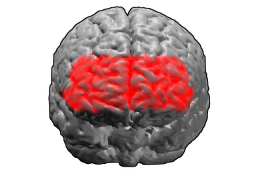 This area is also called frontopolar area 10, and it refers to a subdivision of the cytoarchitecturally defined frontal region of cerebral cortex. It occupies the most rostral portions of the superior frontal gyrus and the middle frontal gyrus. In humans, on the medial aspect of the hemisphere it is bounded ventrally by the superior rostral sulcus (H). It does not extend as far as the cingulate sulcus. Cytoarchitecturally it is bounded dorsally by the granular frontal area 9, caudally by the middle frontal area 46, and ventrally by the orbital area 47 and by the rostral area 12 or, in an early version of Brodmann's cortical map (Brodmann-1909), the prefrontal area 11 of Brodmann-1909.

Brodmann area 10 is a subdivision of the frontal lobe of the guenon defined on the basis of cytoarchitecture. Brodmann-1909 did not regard it as cytoarchitecturally homologous to his human frontopolar area 10. Distinctive features (Brodmann-1905): compared to area 9 of Brodmann-1909, the multiform layer (VI) of area 10 shows an unusual organization of cells into trains oriented parallel to the cortical surface that are separated from one another by narrow cell-free fiber bundles; less marked differences are an overall thinner cortical thickness and a somewhat thicker molecular layer (I). Compared to area 6 of Brodmann-1909, area 10 has a subtle but clearly present internal granular layer (IV); layer 3b of the external pyramidal layer (III) is weakly developed and composed of medium sized pyramidal cells; and the internal pyramidal layer (V) is more developed.

Casts taken from the inside of skull of 'Flo', the female Homo floresiensis designated LB1, revealed significant enlargement of Brodmann's area 10, a brain region thought responsible for planning. This neuromorphological feature is unique to H. floresiensis, sometimes referred to as "hobbits." By relative size, this area is much more prominent in Flo than in chimpanzees, or even in modern humans. This finding is compatible with earlier primate research, which suggests robust gorillas have less frontal cortex white matter than their gracile cousins, the chimpanzees, just as relatively robust humans appear to have relatively less development of BA10 compared to H. floresiensis.