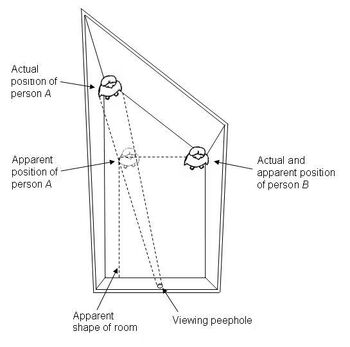 An Ames room is a distorted room that is used to create an optical illusion. It was invented by American ophthalmologist Adelbert Ames, Jr. in 1946 based on a concept by Hermann Helmholtz.

An Ames room is constructed so that from the front it appears to be an ordinary cubic-shaped room, with a back wall and two side walls perpendicular to each other and perpendicular to the horizontally level floor and ceiling. However, this is a trick of perspective and the true shape of the room is trapezoidal: the walls are slanted and the ceiling and floor are at an incline, and the right corner is much closer to the front-positioned observer than the left corner (or vice versa).

Studies have shown that the illusion can be created without using walls and a ceiling; it is sufficient to create an apparent horizon (which in reality will not be horizontal) against an appropriate background, and the eye relies on the apparent relative height of an object above that horizon.

An Ames room is depicted in the 1971 film adaptation of the Roald Dahl novel Charlie and the Chocolate Factory. Also, production of The Lord of the Rings film trilogy used several Ames room sets in Shire sequences to make the heights of the hobbits correct when standing next to Gandalf. The 1960s television show Voyage to the Bottom of the Sea used an Ames room in one episode to show, rather than just declare, an attempt to make two characters (one standing on each side of the room) lose their minds.

A type of selective perceptual distortion known as the Honi phenomenon causes some married persons to perceive less size distortion of the spouse than a stranger in an Ames room.

The effect was related to the strength of love, liking, and trust of the spouse being viewed. Women who were high positive in this area perceived strangers as being more distorted than their partners. Size judgements by men did not seem to be influenced by the strength of their feeling toward their spouse. (Dion & Dion, 1976)

Retrieved from "https://psychology.wikia.org/wiki/Ames_room?oldid=171884"
Community content is available under CC-BY-SA unless otherwise noted.