An alkyl is a univalent radical containing only carbon and hydrogen atoms arranged in a chain. The alkyls form a homologous series with the general formula CnH2n+1. Examples include methyl, CH3· (derived from methane) and butyl C4H9· (derived from butane). They are normally not found on their own but are found as part of larger branched chain organic molecules. On their own they are free radicals and therefore extremely reactive.

The structure of an alkyl is the same as its straight chained alkane counterpart but with one less hydrogen atom. For example, this is the structure of methyl, the smallest alkyl:

Alkyls are radicals since only three out of four valency electrons are used in bonding on one of the carbon atoms.

Unbonded alkyls are free radicals, therefore they are formed only as instantaneous intermediates in reactions usually involving other free radicals. When a free radical is formed it very quickly reacts with something else to lose the unpaired electron.

An example of a reaction where alkyls are formed instantly is chlorination. This reaction involves chlorine free radicals, formed by photodissociation, reacting with an organic molecule, usually an alkane. The chlorine free radical will bond with a hydrogen from an alkane forming hydrochloric acid and leaving an alkyl. This alkyl will then bond to a chlorine to form the product; a chloroalkane. The reaction is very energetic and can be explosive if proper precautions are not taken. This is because of the reactivity of free radicals.

The naming convention for alkyls is much the same as alkanes. The suffix is always -yl. The prefix depends on how many carbon atoms are in the molecule. This uses the same system as for alkanes as shown in this table (taken from IUPAC nomenclature):

For example, the first three alkyls are called methyl, ethyl and propyl.

These names are used to name branched chained structures, for example 3-methylpentane:

The structure of 3-methylpentane consist of two parts. Firstly, the longest straight chain of carbon atoms, 5 carbons long with all single bonds, which is named pentane (highlighted blue). Secondly, there is an alkyl group, which is one carbon long, which is methyl (highlighted red). Alkyl groups are included in the name of the molecule before the root, as in methylpentane. This name is, however, ambiguous, as the methyl branch could be on various carbon atoms. Thus, the name is 3-methylpentane to avoid ambiguation.

If there is more than one of the same alkyl group attached to a chain, then the prefixes are used on the alkyl groups to indicate multiples (i.e. di, tri, tetra, etc.) 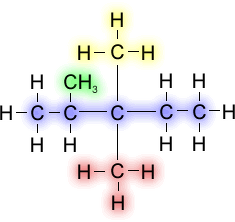 This compound is known as 2,3,3-trimethylpentane. Here there are three identical alkyl groups attached to carbon atoms 2, 3 and 3. These numbers are included in the name to avoid ambiguity on the position of the groups and 'tri' indicates that there are three identical methyl groups. If one of the methyl attached to the third carbon atom was an ethyl group, then the name would become 3-ethyl-2,3-dimethylpentane. Note that when there are different alkyl groups, they are listed in alphabetical order.