The acoustic nerve (also known as the auditory nerve or cochlear nerve is part of the vestibulocochlear nerve, (or 8th cranial nerve) that is found in higher vertebrates. It is a sensory nerve, i.e., one that conducts information about the environment (in this case, acoustic energy that impinges on the external ear) to the brain. The other portion of the 8th nerve is the vestibular nerve. The cochlear nerve arises from within the cochlea and extends to the brainstem, where its fibers make contact with the cochlear nucleus, the next stage of neural processing in the auditory system. and is responsible for transmitting sound information from the inner ear to the brain.

The transmission between the inner hair cells and the neurons is chemical, using glutamate as a neurotransmitter.

It emerges from the medulla oblongata and enters the inner skull via the internal acoustic meatus (or internal auditory meatus) in the temporal bone, along with the facial nerve.

The cochlear neurons can be divided into two groups: Type I and Type II.

The axons from each cochlear nerve terminate in the cochlear nuclear complex which are ipsilaterally located in the medulla of the brainstem. The cochlear nucleus is the first 'relay station' of the auditory nervous system and receives mainly ipsilateral afferent input.

The three major components of the cochlear nuclear complex are: (see figure below)

How hearing information is coded on the nerve has long been a matter of scientific debate between two competing theories, a place theory and a rate theory. 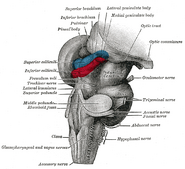 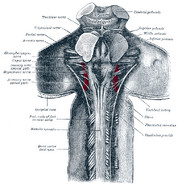 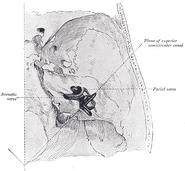 Position of the right bony labyrinth of the ear in the skull, viewed from above.

Vestibulo-ocular reflex
Add a photo to this gallery


Cite error: <ref> tags exist, but no <references/> tag was found
Retrieved from "https://psychology.wikia.org/wiki/Acoustic_nerve?oldid=153552"
Community content is available under CC-BY-SA unless otherwise noted.